A folk art masterpiece in the Cornelius Tarbox house

When Callie and Bob Connor, classics professors from North Carolina, considered purchasing the historic Cornelius Tarbox home on Westport Island, their decision was as much about saving a colonial treasure as about having a waterfront refuge. The house — though in need of “TLC” — had good, solid colonial bones and was decorated with an expansive folk art/maritime mural in the front entry that captivated the Connors.

A floor-to-ceiling mural of a colorful coastal panorama extends through the front hallway and up the stairwell. The mural is done in a similar style to that of folk art muralist Rufus Porter who was active from 1825 to 1840. The Connors’ mural is unsigned — a mystery as to who painted it and as to the story that inspired it. 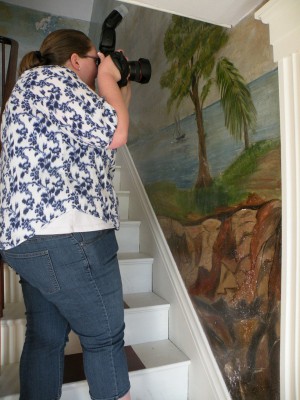 The clues? There is a schooner with flags bearing the initials “WFT”, presumably for Cornelius’s son who died at age 32 — William F. Tarbox (1832-1865), a U.S. flag, a red burgee and a blue rectangular flag with a white circle — possibly a merchant flag? The schooner “William F. Tarbox” was lost with all hands on board in 1857; and the person William F. Tarbox died in 1865 in Nova Scotia where he had moved to stake a gold claim.

The panoramic mural also depicts a lighthouse (Seguin?), a fisherman’s home, a fishing vessel, a seascape with many vessels fading into the background and some grand trees that have a tendency to lean. The type of trees — or the leaning — may be a clue or maybe the brushstrokes, the way people are depicted, or the mural’s resonance with other historical murals in area structures…

By poring through valuation and tax books at the Westport Island town office, Callie established that the Tarbox house was built between 1848 and 1850. Through additional research, the Connors found leads to two additional area murals painted in a similar style. One of the murals is at the Five Islands Baptist Church (built 1841) in Georgetown. That mural was believed to have been done some time after 1864 by “an anonymous itinerant painter”. The third mural is at the Alvah Morse house (built 1847-1852) in Bath. All of these murals are unsigned; experts believe the Connors’ mural and the Five Islands Baptist Church 1864 mural are likely by the same painter.

Are there more murals in our midst that might hold additional clues to who painted the Tarbox House mural? Are there others who may know more about the story or the symbols depicted? The Connors are dedicated to learning this story — a story that promises to add another interesting page to Westport Island history.

This site uses Akismet to reduce spam. Learn how your comment data is processed.