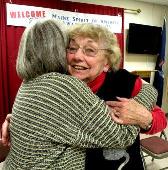 County Administrator John O’Connell presided over the awards ceremony before an audience of almost 50 award recipients, supporters, and camera snipers. State Sen. Chris Johnson was also on hand to present proclamations on behalf of the 125th Maine Legislature to echo its support for the efforts of volunteers in bettering Maine communities.

Westport depends on many volunteers to keep the engines of our community running. Ruth Nelson is one who stands out. As Chair of the Planning Board, she has led an effort to update town ordinances; she has written and secured grants to improve the Ferry Landing; she is Treasurer of the Community Association; and she is a member of the History Committee where her passion for antiques and her writing and editing skills have made her an important resource.

Ruth was uncomfortable with being singled out. However, she glowed when accepting the award from First Selectman George Richardson. She told the audience, “I’m doing what I love. I don’t want to sit around in a rocking chair and look at the water.” (Good deal.)

Westport Island has participated in the Spirit of America awards since 2010. The Board of Selectmen solicits nominations and picks the tribute recipients. Past recipients have been the Westport Volunteer Fire Department (2010) and the Westport Island Human Resources Committee (2011). Here’s a look at this year’s ceremony…

A Westport Island Moment of zen…

Under the watchful eyes of the loon…

Townspeople filed into the Old Town Hall on November 6 to cast their votes — hoping to hand their chosen candidates a “win;” and judging from the comments, hoping to put an end to this year’s political advertising.

The loon has been presiding over town elections since 1889. According to the Westport Island history compiled by John and Louise Swanton, the loon was shot at Squam Creek by Everett McCarthy of the Post Office Road; and “young” Cornelius Tarbox of West Shore Road mounted the bird and presented it to the Town. It’s been sitting atop the beam framing the town hall’s stage as unofficial mascot ever since.

Including absentee voters, Westport Islanders cast a total of 489 votes in this election — representing a voter turnout of over 75 percent. Election officials were primarily volunteers. We owe the integrity of the ballot box, the incoming voter’s list, the ballot count, and the accommodating Westport voting experience to our neighbors. Thank you all…

How Islanders voted the contested races:

Some lost power for 20 minutes here…an hour there…and others were without power for the better part of two days. A minor inconvenience compared to the devastation suffered by some neighbors in coastal New York and New Jersey.

Now, it’s time to be thankful for our electrical power and to say thank you to: those members of the Fire Department who spent the heart of Tuesday night cutting downed trees off utility wires and roads; Earl Grant for spending all night trying to keep roads cleared and safely marked; and Central Maine Power (CMP) and their assisting power crews for efforts to get our power back on.